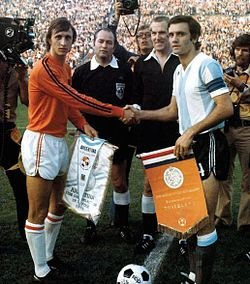 Johan Cruyff started his career at Ajax where he won the Dutch Championship six times. With his vision in the field he helped Ajax win three consecutive European Cup wins from 1971 to 1973. He earned a transfer to Barcelona where he quickly became a hero. In 1974 "El Salvador" helped Barcelona win their first La Liga since 1960, along the way defeating Real Madrid at their home with 5-0.

At the 1974 FIFA World Cup, Cruyff was part of the Dutch 'Total Football' team that introduced a new style of play and just nearly lost the final against West Germany(2-1). Despite losing the final, Cruyff had showed amazing dribbles, goals and above all his brilliant vision at the tournament and was named player of the tournament.

In 1979 at age 32, Cruyff went to the United States to play one season for the Los Angeles Aztecs followed by one at the Washington Diplomats. After having played 10 games for Levante he returned back at Ajax in 1981. Cruyff was now 34 and people were doubting if he had the same level as he had before. He took away all skepticism by winning another 2 Dutch Championships to get to a total of 8 Dutch Championships with Ajax. In his last season of his career he played for Ajax's rivals Feyenoord. He showed his class again by winning the Dutch Championship. Cruyff was a player with a great acceleration and dribbling ability but above all he had a great vision of the game.