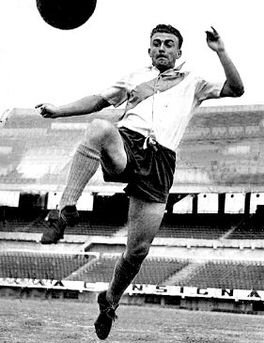 Alfredo Di Stťfano was one of the most important players of the Madrid of the 50s and 60s that won the European Cup 5 times in a row (1956-1960). Di Stťfano scored in every final and made a hat-trick in the last, in a 7-3 win over Eintracht Frankfurt. At that time Di Stťfano's Madrid dominated the Spanish League by winning it 8 times. Di Stťfano had a great stamina and an incredible versatility and tactical vision. Although he was often referred to as a center-forward, Di Stťfano played in the defense, midfield and forward line. Despite being one of the greatest players ever, he never played at a World Cup due to various political reasons.