Garrincha was known for his close control and dribbling ability. He was born with a left leg that was six centimeters shorter than his right, despite or even because of that he turned out to be a great dribbler that would drive his opponents to desperation. He played most of his career at Botafogo in Brazil where he played 581 matches and scored 232 goals. He won the 1958 FIFA World Cup with Brazil together with the other talented player Pelé. When Pelé got injured at the 1962 FIFA World Cup, Garrincha almost single handedly won the World Cup with Brazil at a similar way Maradona did in 1986. In total Garrincha played 50 games for Brazil, at the 1966 FIFA World Cup he played his last against Hungary which was also his first and only lose with Brazil. 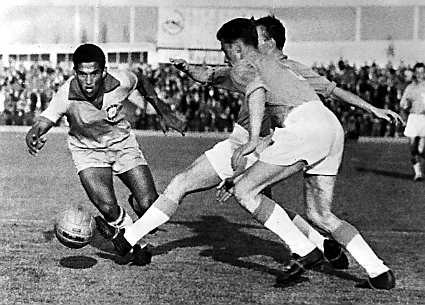